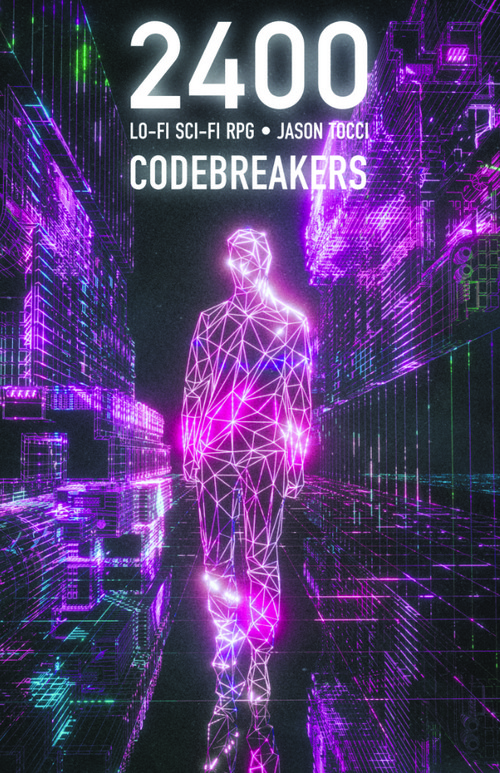 I thought I might be done updating 2400 for a while, but couldn't stop thinking about Codebreakers: an unabashed homage to The Matrix. You play hackers, investigators, and innocent bystanders who stumbled upon The Truth that your life on late 20th century Earth is all just a simulation. You've glimpsed enough of the code behind reality to exploit it, at the risk of attracting the attention of relentless daemons.

Codebreakers works both in isolation and in combination with other 2400 microgames, as it leaves open the question of what purpose "the simulation" serves, and what the world is like outside it. Maybe you'll get out some day to find that it's a weird recruitment process to become an agent of CTRL in ALT, or it's some alien experiment to learn about humans in Xenolith. Up to you (or a roll of the dice).

If you're looking for "tech" you can use in other 24XX games, there are a few deviations from the usual rules here worth noting.

"Exploits" are basically spells by any other name — a magic system that only works in the simulation, but governed by a simple rule that could be adapted to other settings. You can use an exploit anytime, without testing your skills, but if the effects bend the laws of reality too far, the GM tests luck to see whether it attracts the attention of daemons. It's a useful approach for when you want "magic" to be risky, but you don't want to track too many currencies. To adapt to another setting, just consider what environmental risk the luck test represents (e.g., risk of "defiling" the world in Dark Sun, or risk of drawing agents of the enemy in In Nomine). You could alternatively choose to tie the roll to one of the character's own skills rather than a luck test (say, an "Imagination" skill, or even "Hacking," in this setting); I just wanted to leave open the option to use bigger dice than most characters have for skills, so players wouldn't be to afraid of using their powers. (But I'm already wondering if I need to revise this, so we'll see.)

"Daemons" themselves are handled a little differently from other 2400 antagonists — the ways you might interact with them are fairly explicitly outlined with a series of GM-facing "moves" inspired by Powered by the Apocalypse games. The daemons are literally AI in the game world, so I thought it made sense to basically codify some "AI" to dictate interactions with them. You don't really need to prep traditional "stats" for antagonists in 24XX games, but moves offer a nice way to define some parameters of interaction and how much of a threat they pose.

"Luck tests," by the way, are old tech, used in every 2400 game and swiped from Electric Bastionland. This is the first time I've explicitly suggested doing something I do all the time myself, though: Use a different size die for different situations. It does give the GM one more thing to think about, though, so I sure wouldn't hold it against you if you decided to stick to using a d6 every time.

This game has been rattling around in my head for a while, but some of the ideas in it only came together relatively recently. If you get it to the table, I'd love to hear how it goes.